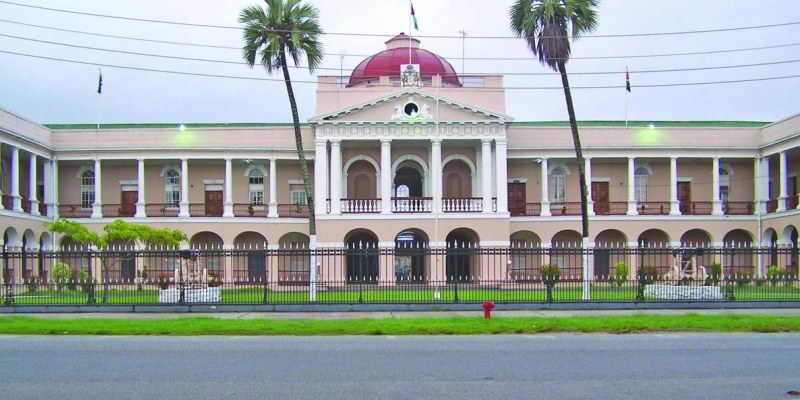 In 1928 a new Constitution was introduced and British Guiana became a British Crown Colony. A Legislative Council was established and replaced the Dutch created Court of Policy.

In 1953 a new Constitution was promulgated and a bicameral legislature, consisting of a State Council and a House of Assembly was introduced. The State Council consisted of nine members. The House of Assembly consisted of a Speaker, three ex officio Members and twenty four Elected Members. The Speaker was appointed by the governor. A new and separate Department, which was called the Office of the Legislature, was established with a Clerk of the Legislature as its head, to serve the new bicameral Legislature. Also in 1953 also a Ministerial system of Government and universal adult suffrage were introduced.

The Legislature that came into effect in May, 1953 was short-lived as in October, 1953 the British suspended the Constitution and an Interim Government was established by the British Guiana (Constitutional) (Temporary Provisions) Order in Council, 1953. A Legislative council consisting of a Speaker, three ex officio Members and not more than twenty four Nominated Members was created by this Order on the 22nd December, 1953. The Speaker, who was not an ex officio member or Nominated member of the Legislative Council, was appointed by the Governor.

In 1957 general elections were held and the PPP Jaganite under the leadership of Dr. CheddiJagan won the elections. A second Legislative Council constituted under the (British Guiana (Constitution) Temporary Provisions) Orders in Council 1953 and 1956 was appointed. The Legislative Council consisted of the Speaker, three ex – officio members, fourteen elected members and eleven nominated members.

The life of the Parliament of Guyana is five years. In accordance with article 70 (3) of the Constitution, Parliament shall, unless sooner dissolved, continue for five years from the date the National Assembly first meets after any dissolution and shall then stand dissolve.

The President is the Supreme Executive Authority and the Commander in Chief of the Armed Forces. He is not a Member of the National Assembly but is empowered under article 67 of the Constitution to attend and address the Assembly at any sitting. He may also send messages to the Assembly, which may be read by the Prime Minister or by any other Minister designated to do so. The President may also address the Assembly on the state of the nation whenever he desires.

The National Assembly consist of sixty five (65) elected members. Forty (40) are elected from the National “Top- Up” portions of the List of Candidates and 25 are elected from Geographical Constituencies. The National Assembly can also have non- elected Members. The non- elected Members are those Ministers and Parliamentary Secretaries who are appointed from among persons who are not elected Members of the Assembly. Up to four Ministers and two Parliamentary Secretaries can be appointed from non-elected persons.The Assembly therefore have no more than seventy-two (72) members.